Google Pixel Watch Freezes During Update? Here is the solution. Since its debut in October, the Google Pixel Watch has gotten various updates, however the latest update in January which brought an updated security patch seems to cause an annoying bug on some Google smartwatches.

Some users have reported that the Pixel Watch gets stuck on a “preparing to update” screen and even though notifications are audible and holding down the power button still brings up the power menu, the smartwatch display doesn’t respond to taps.

Such episodes were also reported with the December update and it seems that the inconvenience occurs when the user wears the smartwatch during the update, instead of putting it back in charge.

If you have come across this bug, know that there is a quick fix to get your Google Pixel Watch back to use. Here’s how to proceed.

It is worth noting that a disturbing error interface may appear on the first start attempt, but moments later the smartwatch will restart correctly.

This probably happens because Wear OS reverts to the previous version, having failed to complete the installation of the latest update. 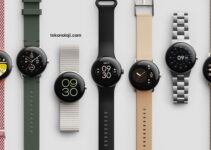