What is the difference between AirPods Pro and AirPods Pro 2: what has changed? At its presentations, Apple usually presents several products, because the company successfully sells not only the iPhone. In addition to a whole bunch of cool gadgets, there is also a very remarkable accessory – wireless headphones. What’s more, AirPods also have their own Pro segment, which gets the most technology. In the fall of 2022, the second model of these headphones was introduced. But how they differ from the old AirPods Pro, we’ll talk. Users will undoubtedly wonder how AirPods Pro 2 is better than AirPods Pro.

How to Merge Folders on Mac (macOS)?

The dimensions of the case of the new model are 45.2 × 60.6 × 21.7 mm, and it weighs 50.8 g. I must say that its dimensions are exactly the same as those of the AirPods Pro. Both cases are made of glossy white plastic. However, there are some significant differences. In AirPods Pro 2, the case weighs 50.8 g compared to 45.6 g for the previous model. The external difference between cases and headphones is that the second model has a special fastening for a strap on its side.

Such a smart decision will enable a new way of wearing the device. Previously, you had to use some kind of covers, which made the case less compact.

In addition, new holes can now be found on the bottom of the case. But more on that later. The AirPods Pro case had no holes (other than the Lightning connector) or mounts.

The case itself has retained its protection against moisture ingress, it complies with the IPX4 standard.

The new model, AirPods Pro 2, is now powered by the Apple H2 chip. But the predecessor was controlled by the Apple H1 chip. The developers claim that performance and audio bandwidth will improve.

Each of the AirPods Pro 2 headphones received four sensors. The first sensor is responsible for ear detection, the accelerometer detects movements, there is also a speech recognition sensor and a pressure sensor equipped with a touch control panel.

The AirPods Pro 2 case now has an Apple U1 chip. With it, the lost case can be found using the Find My app. But this is not true for all countries, not everywhere this function is certified, in particular.

AirPods Pro also have four sensors: a dual optical sensor, an accelerometer, a voice activity sensor, and a pressure sensor (no touch pad). But the charging case does not have any chips. Everything is much simpler here.

In the new AirPods Pro 2, you can find all the technologies that have already become standard for Apple headsets. Here you can activate Siri by voice, the headset can automatically switch between devices if they are all linked to the same Apple ID account. The headphones received an adaptive equalizer, implemented spatial audio with head position detection, and support for a wide dynamic range. Of course, the “chips” of the Pro model have not gone away, which the first-generation AirPods basic models lack: active noise cancellation, transparency mode, and a pressure equalization system.

Compared to the first generation AirPods Pro, it’s safe to assume that the new chip and improved sound isolation will positively impact spatial audio and noise reduction algorithms. Transparency mode is now adaptive, it will be able to adapt to the volume and the number of ambient sounds.

The first generation of headphones, AirPods Pro, work with the same basic functions: control with Siri, automatic switching between devices, support for a wide dynamic range. The headset also has spatial audio, noise reduction, transparency mode and an adaptive equalizer. But the already outdated H1 chip will make these functions work a little worse than in the new product.

The AirPods Pro 2 headset case has a built-in speaker. It is needed to activate the search signal. You also need a speaker in order to signal a completed pairing or a low battery level of the case.

AirPods Pro 2 has a new capacitive layer on its touch surface. It helps to recognize the swipe gesture. Thus, you can increase or decrease the volume with a simple movement of your finger.

In the new model, the wireless module now supports the latest Bluetooth 5.3 communication standard, while its predecessor worked with Bluetooth 5.0.

AirPods Pro 2 received an increased set of complete additional ear pads. They come in sizes XS, S, M, L. In the previous model, there were only three attachments. 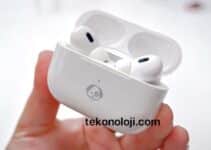