Home
Apple
Apple iPad 10 review: because it’s the RIGHT one for everyone!

Apple iPad 10 review: because it’s the RIGHT one for everyone! The new iPad 10 is the perfect example of how a product should be made in 2022. In a period where attention to the wallet is paramount, Apple has decided to renew its entry-level iPad with a series of updates that, finally, they standardize it (at least in part) to iPad Air, iPad mini and iPad Pro.

The design of the new iPad 10 is borrowed from the aesthetic language of iPad Pro, iPad Air and iPad mini. Finally, I would say. The frames and the Home button disappear to make room for an uninterrupted and decidedly more immersive screen. The camera is also relocated, now positioned on the upper long side of the tablet to improve its use during video calls. The back is made of aluminum and the body seemed to us more solid than that of the last iPad Air (which in some cases “creaked” when squeezed with force). The dimensions and weight of the new iPad 10 are contained, making it the perfect device to be easily transported in a bag or backpack, ready to become operational whenever the situation requires it.

However, the experience is completed by two fundamental accessories: the first is the first generation Apple Pencil, unfortunately not magnetic and slightly less precise than the Apple Pencil 2, but which above all can be recharged only and exclusively using a Lightning / USB adapter – c. The second accessory is the Magic Keyboard Folio, designed to offer users a keyboard with trackpad and function keys (which are not even in the Magic Keyboard of iPad Air and iPad Pro). The keyboard consists of two pieces: the actual keyboard and a rear stand/case that can be used independently of the keyboard, perhaps even just to place the iPad on a table during a video call or to watch a TV series.

The Home button disappears, but not the Touch ID: in fact now, just like on iPad Air and Mini, iPad 10 also includes a fingerprint recognition sensor integrated inside the power button.

The screen of the new iPad 10 renounces, as mentioned, the frames and grows slightly in size, reaching 10.9 “diagonal. The Liquid Retina unit offers a resolution of 2360×1640 pixels at 264 ppi and a peak brightness of 500 nits. True Tone is supported but the 120 Hz refresh rate (ProMotion) is missing. The screen is definitely improved overall compared to the previous ninth-generation iPad, but it still lacks the full lamination feature found on the other iPads in the lineup.

For viewing multimedia content, in any case, the iPad 10 performs very well and manages to cover the P3 range. The blacks are obviously not those of an OLED or a microLED, but the Liquid Retina screen works wonders and comes very close to the more expensive alternatives.

Inside iPad 10 we find our old acquaintance, namely the Apple A14 Bionic processor. It is therefore not the latest invention of the “A” line or even an “M” architecture, but the performance returned by this tablet is absolutely sufficient to satisfy all palates a little. We encountered no problems with photo editing, with the most hardcore games and with daily multitasking. The only scenario in which a performance difference is perceived with an iPad Pro is high-resolution video editing and, above all, the rendering of such videos. If you have special needs, iPad 10 probably isn’t your best option. If, on the other hand, you are looking for a tablet to watch some movies or TV series, exchange emails, visit social networks and do research with the browser, then iPad 10 is the perfect iPad for you. No need to spend more.

iPadOS 16 runs incredibly well on this iPad. Honestly, I would have expected some small indecision, slowdowns and other problems which, alas, iPadOS 16 had also highlighted on the most performing iPads. Instead, none of this. The small Apple tablet runs very well in any context of use, even with multiple apps open simultaneously. Stage Manger is missing, this is true, but we are sure that it will be a lack that many will not notice.

The connectivity of the new iPad 10 is now updated with WiFi 6, with Bluetooth 5.2 and above all with the advent of 5G. There is also support for eSIM to create a data plan on the fly directly from the iPad, without the need for physical cards.

On the audio front, however, we find a system of four adjustable speakers, positioned on the short sides of the iPad. The audio is powerful and immersive just like that of the iPad Air and only the iPad Pro manages to convince more.

The rear camera of iPad 10 is updated with a new 12 megapixel sensor and with an aperture with f / 1.8 aperture. This camera with five element optics supports digital zoom up to 5X, autofocus with Focus Pixel, 63 megapixel panorama function and Smart HDR 3. Videos go up to 4K resolution at 60fps. The front camera, repositioned as already mentioned, now uses a 12 megapixel, f/2.4 ultra-wide-angle lens, with a 122-degree field of vision and support for the Center Stage feature to always keep the subject at the center of video calls.

Speaking of photo and video quality, obviously iPad 10 is a tablet and therefore it shoots as such. To make you understand, with iPad 10 it is possible to take approximately the photos that can be taken with an iPhone X. We are therefore a long way from the standards achieved by the iPhone 14 Pro Max and the like. The same goes for videos that show a lower level of detail and electronic-only stabilization that often fails to cushion all movements.

The battery of the iPad 10 is absolutely in line with expectations. Apple confirms 10 hours of use and, more generally, an autonomy capable of covering an entire day of use. All of this has been widely verified during our days spent in the company of iPad 10. Recharging now takes place via a USB-C cable (in fact the Lightning connector disappears) and is fast enough, but not among the fastest around.

iPad 10 is a well-rounded iPad that is inspired by what the iPad was before the advent of the Pro and Mini models. A simple, direct and reliable iPad for all the daily tasks that are performed with greater pleasure or comfort on a tablet. This year the entry level has been heavily revamped but remains almost as accessible as the previous model. It starts at €589 for the 64 GB WiFi-only version, while €200 more is required for WiFi+Cellular. The same €200 extra that will be needed to switch from the 64 GB model to the 256 GB one. If you double the memory and add the Cellular option, the new iPad will cost you a whopping $989. Not quite a few, but always less than an equally “pumped” iPad Air. And basically, with iPad 10, you do everything with it that you do with any other higher-end iPad.

With iPad 10 an era closes. The era of Lightning, bezels and the Home button. Now even the cheapest iPad marries the new aesthetic and functional standards dictated by the iPad Pro a few years ago. iPad 10 is for an all-round iPad that renounces the ambitious (still today) claim to replace a computer. With it, however, you do a good 95% of the things you could do with a hyper-bodied iPad Pro M2. And this at least at half, if not even a third of the price. Sometimes it really doesn’t make sense to spend more. 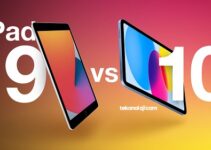