The smartphones continue to come to the highly anticipated Apple’s new smartphones. The features of the phones were revealed and the images started to be shared one after the other. Finally, we saw that the rendering images of the iPhone XR 2019 were published. Immediately after the rendering of the new smartphones the information for the flagship series appeared. iPhone XI case designs news.

iPhone XI How to Design a Future?

There are important details in the case images of the new smartphones. iPhone XI and iPhone XI Max model 3 allegedly confirmed the new rear-view camera. There is also important information about the placement of the cameras.

There will be 3 cameras installed horizontally according to the case images of the phones. It is not known what technology will be included in the third camera section that will be located next to the double rear camera.

The layout of the 12 MP camera will probably change. In the two main cameras, 12 MP cameras are expected to be used. But in the third camera part, a different technology seems to meet us. Especially the lenses are slightly larger.

It will only be possible to see that the camera layout at the back makes a difference. Apart from that, we will see the design of the notched screen and the design of the thin frame smartphone. Again, there will be no change in these sections. 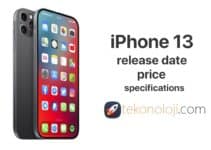