How to install iOS 14 Public Beta. While Apple had announced that the first public beta of iOS 14 would not be available before next month, to everyone’s surprise, Apple has just released this one for the testers of the public beta program.

It is primarily a test version that anyone can install on their machine, but note that this is not without risk since major bugs can occur.

However, for the more impatient who want to discover the new features, see here more than 70 changes listed, but also those who want to help Apple in detecting malfunctions, here is how to install this trial version. Knowing that it is possible to go back, to iOS 12:

iOS 14 and iPadOS in public beta, watch out!

Who says beta says test version, and therefore this iOS 14 in public beta is not really finished yet and of course not free of bugs.

We always recommend installing a beta version on a secondary device, such as an old iPhone (iOS 14 being compatible from iPhone SE and iPhone 6s), or an iPad (for iPadOS) whose use does not is not a priority. Better to avoid installing the daily newspaper on your iPhone, especially when it’s the first public beta.

In any case, regardless of the machine chosen, you must inevitably make a backup before anything else, via iCloud, iTunes or both. This backup of iOS 12 will serve as a backup in case the machine running iOS 14 beta encounters too many problems, in order to be able to return to iOS 12.

How to install the public beta version of iOS 14

First, sign up for the beta test program here at Apple at beta.apple.com. Those who have already tested earlier beta versions, such as those of iOS 11 or 12 in previous years, do not normally need to re-register, just log in with the account used during registration.

After registering, Apple asks to validate the test clauses and then offers to go to the “beta.apple.com/profile” page to install a specific “profile”. This allows the system on iPhone or iPad to view the beta update as an update to the current system.

Please note, for a smooth installation of the profile, it is preferable to use the Safari browser to go to this profile download page.

Once the profile is installed, which is normally done automatically, the latest beta version of iOS available will appear in the updates, iOS 14 in this case. The update procedure is then performed as a standard wireless update (OTA). We repeat once again, absolutely plan a backup before migration to iOS 14, it is vital!

What if installation of iOS 14 is not offered?

In general, everything works pretty well for these beta installations. But if the version is never offered, check that the iOS 14 Beta profile is installed. To do this, go to Settings> General> Profiles and check that the one entitled “iOS 14 Beta Software Profile” is present.

It can be useful if the profile fails to install, kill the “Settings” app and then redo the manipulation so that it ends up installing.

And when we already have a beta in progress?

No panic! It turns out that Apple sometimes tests two versions of iOS in parallel and this is the case when the first iOS 14 beta was released. Thus, some have installed the public beta iOS 12.4. In this case, to switch to iOS 14, you must delete the profile associated with this version, then return to the beta.apple.com/profile page and reinstall the beta profile, restart and iOS 14 Beta should then be offered for download!

How to exit the iOS beta test program

For the disappointed or those who do not wish to continue with the test, it is possible to exit the beta program very simply.

While Apple had announced that the first public beta of iOS 14 would not be available before next month, to everyone’s surprise, Apple has just released this one for the testers of the public beta program.

And at the same time, if in addition, you want to return to version 12 of iOS, the complete manipulation of restoration is described here in detail in the paragraph “Uninstalling the beta version of iOS”.

Knowing that this public beta program can report bugs and other malfunctions to Apple is important, because it is thus useful for the whole community, that is also the goal! 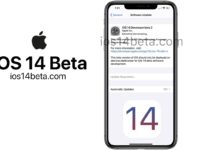